Mr. Gabel: For the average client that might not be a billionaire or have an active threat against them, are there some basic things that they can do to increase their general security whether it’s at their home or their office or for their family as a whole?

Mr. Coleman: I think there are a lot of things, it really comes down to common sense. As human beings we have a natural tendency to detect when there’s a problem. You feel funny about a situation, you have a gut instinct that this doesn’t feel right. Trust those instincts, that’s the number one thing I would tell those people. The next thing would be to increase your awareness. Not just sort of this passive, “I got a gut feeling,” but now this active awareness of, “I’m actually going to walk out of the office, I’m going to put my phone away, I’m going to pay attention to what’s walking around, who might be in my immediate environment when I’m walking out to the car.” Same thing when moving around at night at restaurants, always know where there’s a second entrance or exit. There’s a world right now that we live in that’s full of active threats. It could be the cars on the sidewalk, it could be the knives that are coming out in some close environments in Europe that we’ve seen. Or it could be unfortunately, what we’re seeing in some places, is the active shooters. But we’re just categorizing them as active threats, always look for that second way out of a place. A theatre, a restaurant, whatever it may be. Be aware that large gatherings of people present a really great target. I’m not a fan of going to those kinds of environments just because of the experience, but it’s not something to be feared, but just know where you are when you’re in that environment. Your awareness should be heightened.

I mean, for the clients that go to some of these high-risk environments, I’m telling them, take a legal pad and a pencil and leave your phone and your laptop at home and that’s how you take your notes. They don’t like that, there’s an element there of convenience. You know, what side are we leaning on, more convenient or more secure?

Lastly, I think the other thing I would have people pay attention to is health and travel. We’re living in a world of hypermobility; you know you can go from one side of the country to another in four and a half hours. You got a phone that’s on 24/7 and it persistently puts your online persona out there 24 hours a day. Whether it’s Shanghai, you’re in London, you’re in Hong Kong, you’re in Hawaii, it doesn’t really matter. I think those three elements are really key; security awareness, digital and privacy issues are really important, and then travel and health issues are probably the three things I would say that everybody can make a difference in our own lives. 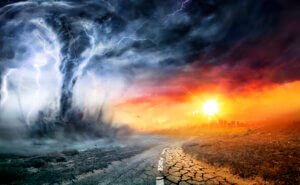